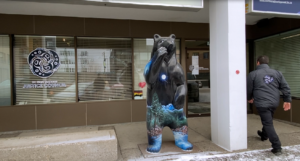 A year later and despite the COVID-19 pandemic, there are now three IJCs open and operating in the areas of Merritt, Prince George and Prince Rupert and, within the next few years, a total of 12 more IJCs are planned for locations throughout BC.

“We focus on making the IJCs a culturally-safe space for Indigenous people to seek out assistance with their criminal and child protection matters,” says Renzo Caron, BCFNJC’s provincial director of the Indigenous Justice Centres.

“The IJCs are community-based and Indigenous-led and help to deliver justice in terms that Indigenous people can relate to. We offer a different model based on a restorative approach that builds upon the ways that Indigenous communities delivered justice in the past.”
The ultimate goal of the IJCs is to address the over-representation of Indigenous people at all stages of the justice system by connecting individuals with traditional communities, Indigenous principles of justice, restorative justice programs, Indigenous service providers as well as using an invigorated approach to Gladue rights.

The IJCs also exercise an Indigenous concept that focuses on accepting responsibility and restoring balance, within the individual and the community. Unlike the colonial system, which aspires to determine guilt and punishment, the Indigenous approach strives to create peace and harmony through restorative justice practices and community involvement.

“The reconciliation of the accused with those they have wronged and the values of the community where they live is a unique aspect of Indigenous justice systems.”

“The aim of this process is to restore balance and harmony to the relationships between the victim, offender and their families. The reconciliation of the accused with those they have wronged and the values of the community where they live is a unique aspect of Indigenous justice systems. This community-based model of justice ensures that all invested parties are recognized in the proceedings,” explains Caron.

With the understanding that the reasons for committing an offense are often multi-faceted and complex, at the IJCs, clients are provided with a holistic strategy to address their legal issues in a two-stage process. First, the client meets with one of the centre’s lawyers who provides advice and, if appropriate, legal representation for the client’s matter.

IJC lawyers may also request a Gladue Report for their client or discuss options for early diversion away from the justice system or alternatives to incarceration with Crown Counsel. Additionally, clients may be referred to restorative justice programs and IJC lawyers may also advocate on behalf of their clients for specific sentencing conditions that will help them avoid incarceration. These legal services are provided for no or low cost based on income.

In the second step, the client meets with a community outreach coordinator who can provide access to programs within the community that support recovery and healing, including assistance for housing, government benefits, and applying for schooling or jobs.
The IJCs, as well as the overall BC First Nations Justice Strategy, represent a coordinated response to the increasing overrepresentation of Indigenous people at every stage of the criminal justice system. Despite popular perceptions of progress, the statistics continue to worsen each year.

Indigenous adults make up 32% of BC’s in-custody population, despite comprising only 5% of the population at large. The numbers for crime victimization, especially for Indigenous women, are similarly bleak.

According to the 2016 census, of children in care in BC, 60% are Indigenous despite Indigenous people comprising only 6% of the general population. Indigenous women are also taken into custody at 9x the rate of the general population and make up 47% of women in custody in BC. Police violence against Indigenous people is exceptionally and disproportionately high and it is these factors that have encouraged a remarkable level of cooperation between Indigenous communities and the BC provincial government. Such cooperation, however, is not without its challenges. 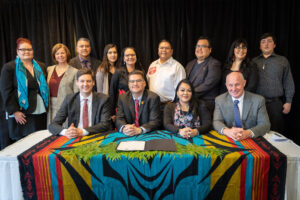 Bringing together two diametrically-opposing worldviews was a significant hurdle for the BCFNJC, First Nations communities and BC government to overcome. Traditionally, the Western justice system does not countenance other justice systems operating within or alongside it – it is a universalizing force that regards itself as purely objective and rational.

Through collaboration, these stakeholders were able to combine their respective knowledges to share ideas and develop innovative solutions culminating in the development of the ambitious BC First Nations Justice Strategy. For the BCFNJC, the experience thus far has been a positive one that Caron says has signaled “the beginning of an extensive collaborative relationship with many different stakeholders as the Strategy is implemented.”

Collaboration is a cornerstone of both the IJCs development and continued operation. The IJCs rely on Indigenous community engagement sessions to identify a community’s needs. These needs are then incorporated into coordinating and delivering the appropriate services in a community law office model. This amorphous feature of the IJCs not only allows the centres to better serve their clients but also allows for greater flexibility in addressing challenges in the present and future.

The IJCs also serve an important role in Canada’s journey for reconciliation. In the process of colonization, Indigenous justice systems were delegitimized and dismantled, replaced by Western concepts of law and justice that are accepted forces in Canadian society. Recognizing and empowering the pre-existing justice systems of Indigenous people is critical for deconstructing Canada’s colonial past and for achieving reconciliation.

For more information about the Indigenous Justice Centres, please visit the BCFNJC website at https://bcfnjc.com/.